By Michelle Martin For Mailonline

Chrissy Teigen, shared an adorable video of her getting into the festive spirit by baking cakes with her two children on Boxing Day.

The TV presenter,36, showcased her culinary skills with her two children Luna, 5 and Miles, 3 with a selection of mouth watering baked goodies.

The children could hardly contain their delight as their mum filmed them attempting to help their mum in the kitchen. 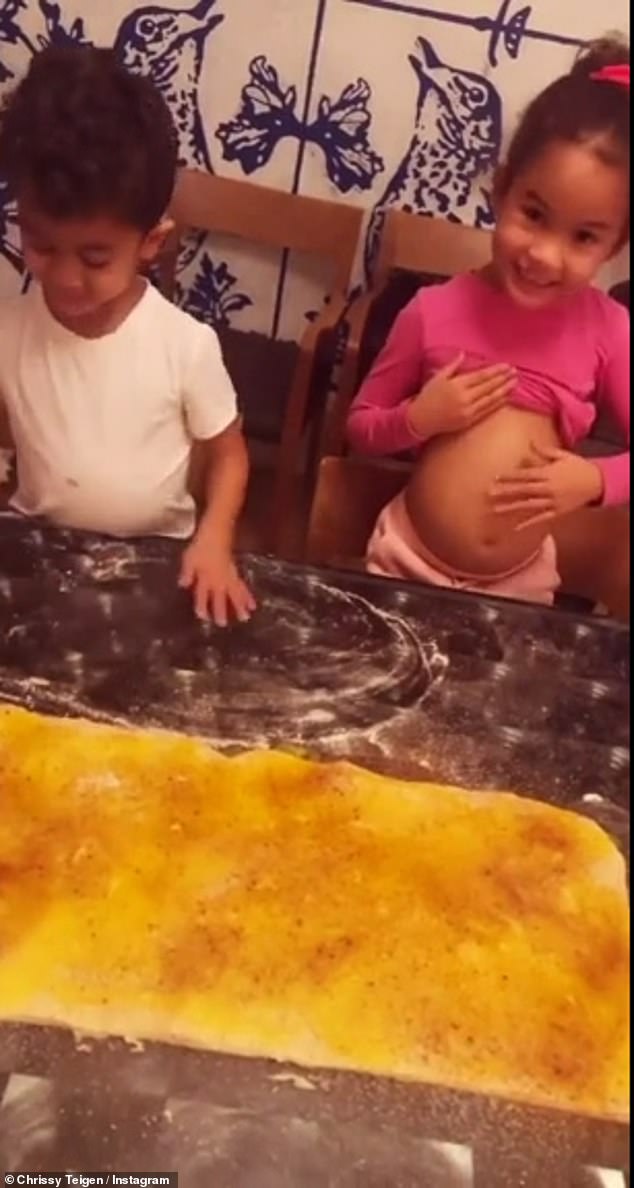 Family fun: Chrissy Teigen, 36, shared an adorable video of her children Luna, 5 and Miles, 3, helping her bake cakes on Boxing Day in the Cotswolds in the UK

Chrissy who shares her two children with Grammy Award winning singer songwriter John Legend, 42, looked every inch the cake fairy as she showcased her baking skills.

The eye catching display included a range of baked desserts and a mouth watering image of the Lip Sync Battle presenter pouring custard over one of the pies.

The cute video comes as it was revealed that the family decided to spend the festive season in the UK. 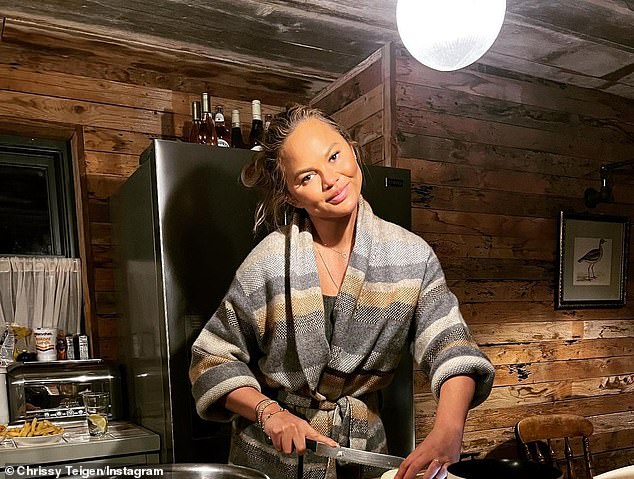 UK bound: Chrissy decided to showcase her culinary skills whilst on vacation in the Cotswold for Christmas

It was revealed that the family celebrated the festive season by spending time in the village of Bourton-on-the-Water in the Cotswolds.

The family appeared to be staying in an intimate wooden cabin, and Chrissy included a photo of herself in a striped robe as she chopped vegetables for their dinner.

Pictures shared to her 36 million Instagram followers show the family going out for frosty walks, cooking dinner and settling down with a hot drink before a wood burner in their  holiday home

Chrissy even asks for advice on a good mystery series to watch while she is in England. 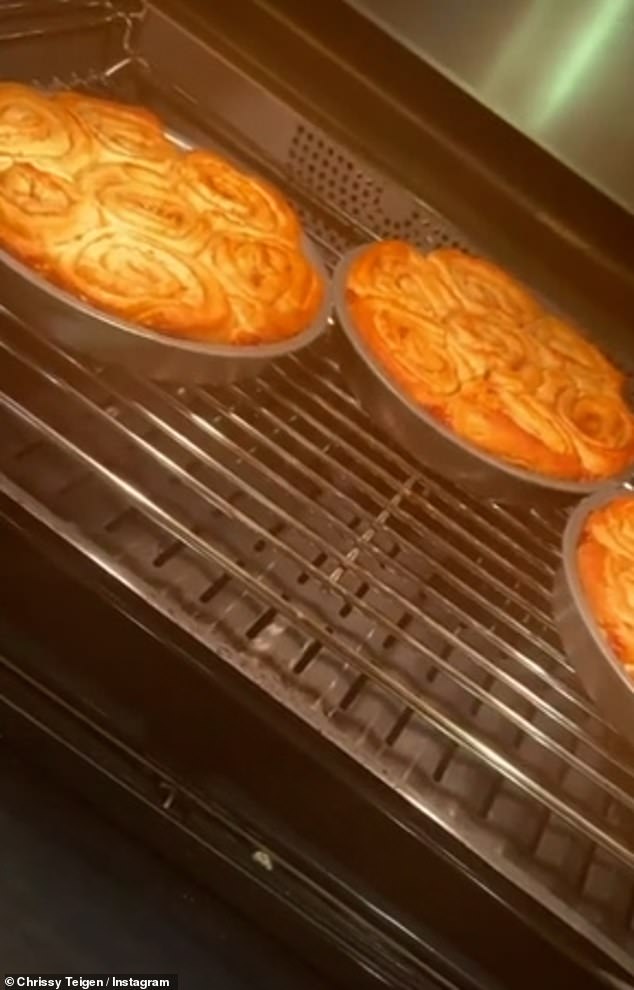 British fans were quick to identify where the family were from images posted on her Instagram page with fans recognised locations around the area.

With one fan writing 'Welcome to the Cotswolds,'

They even gave her tips on what to do and eat while the family are in the UK.

With another posting: 'Good old blighty'! and suggested she tries the great British staple, HP Sauce.

'Try HP sauce in a bacon sarnie! White fluffy bread buttered to the edge, bacon and HP sauce! The DREAM!

To capture the essence of a true British Christmas she even posted a cute snap of  husband, John, relaxing in front of a wood burning stove and her enjoying a cup of tea. 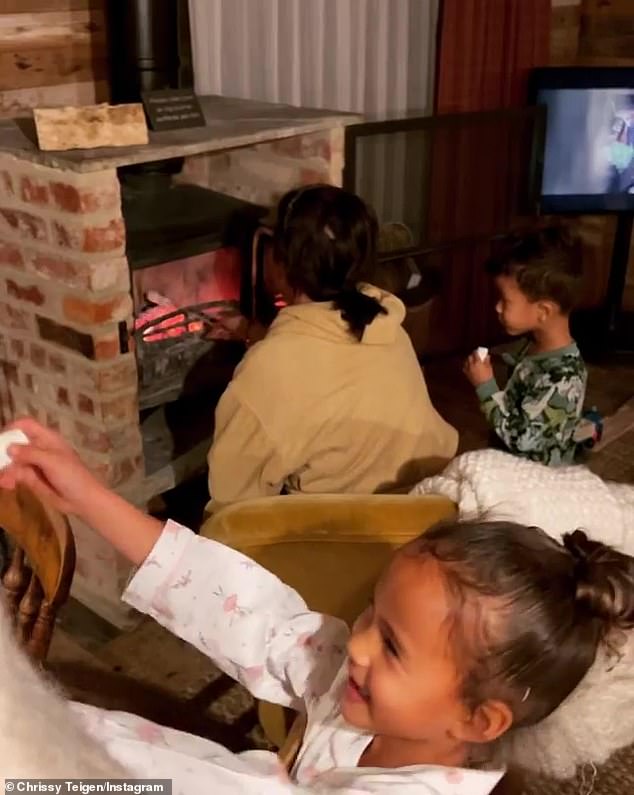 Family time: The model and husband singer songwriter John Legend decided to spend Christmas in the UK with their young family

Chrissy recently got into a spat over her Christmas plans after she was worried she'd been tricked into answer a question about mask wearing at her hypothetical Christmas party.

She felt she had been 'tricked' after an interviewer for TMZ asked if she planned to wear masks at home.

She stated during that short chat that 'vaccinated is the way to go' and said she wouldn't be throwing a big Christmas party this year.

The model previously said that all of her family would be over for Christmas, though it's unclear if they'll be joining her in the UK, or if her family intends to fly back to the US in time to celebrate Christmas. 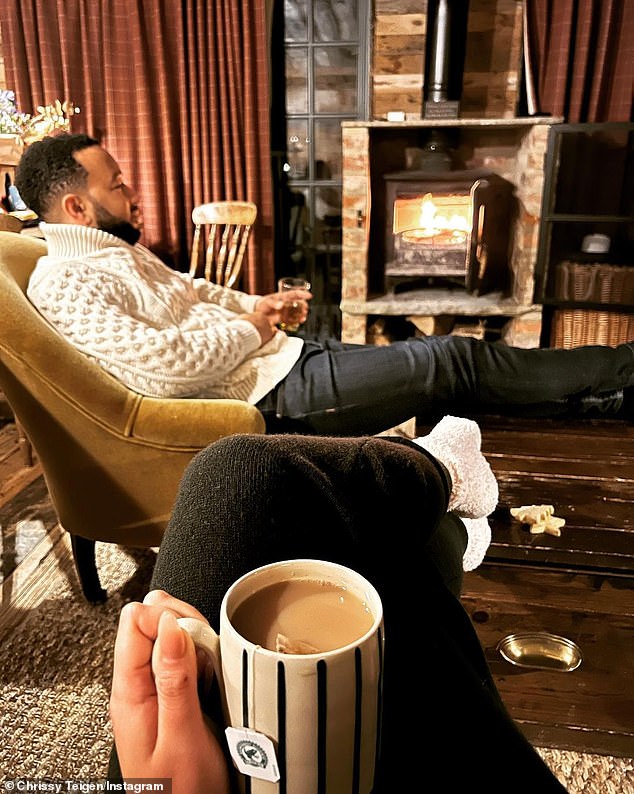 Read Chrissy Teigen Gets Mistaken By Fans As Khloe Kardashian In New Photo by YAHOO!News