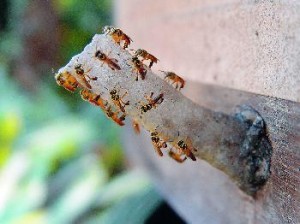 Viagem ao Brazil [Voyage to Brazil] was one of the first books ever written entirely about Brazil. Since 1557, when it was first published in the town of Marburg, in Hessen, Germany, it has been a roaring editorial success, with more than 80 editions in several languages. And though it has been often read in the last few centuries, it still holds surprises. Wolf Engels, a German geneticist and zoologist from the University of Tübingen, for instance, had his attention drawn to chapter 35 in the second part of the book. In a segment of just 115 words, Engels identified the first description of stingless bees ever recorded in Brazil. This year, he published an article about this in an online issue of Genetics and Molecular Research.

“Hans Staden’s book is renowned, but its information on fauna and particularly on the native stingless bee had never been cited,” says Engels, who works for the Genetics Department of the University of São Paulo, in Ribeirão Preto, and who has been involved with bi-national projects involving Brazil for 40 years. “I know the three species very well and the details Staden describes are precise.” The stingless bees were only classified as a characteristic group, that of the Meliponinae, 250 years after the publication of Voyage to Brazil. The book describes the two visits of the German artilleryman to the country and narrates how he was taken prisoner by the Tupinambá cannibal Indians, but managed to escape.

The segment that attracted the German researcher’s attention was: “Three kinds of bees are to be found in the country. The first are similar to those we have here. The second are black and the size of flies. The third are small, like mosquitoes. All these bees make honey in tree hollows and I have often taken honey from the three species along with the savages. The small ones, in general, produce better honey than the others. They also do not sting like the bees over here. I often saw the savages extracting honey and getting so covered in bees that they had to remove them from their naked bodies laboriously, by hand. I myself have extracted honey, naked; but the first time the pain drove me to jump into the water and to get rid of them there” (Editora Martin Claret publishing house, 2008).

According to Engels, the three types are the mandaçaia (Melipona quadrifasciata), the mandaguari (Scaptotrigona postica) and the jataí (Tetragonisca angustula), all of them indigenous bees that are native to Brazil and whose sting is atrophied. The country has more than 300 such species. Though they do not sting, they protect their honey with small bites on the skin. Paulo Nogueira-Neto, professor emeritus of the University of São Paulo, author of Vida and criação das abelhas-indígenas sem ferrão [Life and raising of stingless native bees] (Editora Nogueirapis publishing house), was one of the first researchers to study these species in the country, as was Warwick Estevam Kerr, an animal genetics expert.

Nogueira-Neto recalls a letter that the priest José de Anchieta wrote to father Diogo Laines, his superior at the Society of Jesus, in 1560, just three years after Staden published his book. Here, Anchieta makes many comments on Brazil’s fauna and flora; he also mentioned the bees that “make honey within tree trunks.”

Nogueira-Neto tells us that at the time when he headed the Special Environmental Bureau (1974-1986) and created the Tupinambás Environmental Station in the town of Ubatuba, he resorted to Viagem ao Brasil to name some islets. “At the time, there were some unnamed islands,” he recalls. “As the National Property Bureau does not admit unnamed places, I used the book to give these islands indigenous names, because it was on that part of the São Paulo State coast that Hans Staden was held prisoner by the Tupinambá Indians,” says Nogueira-Neto.

This article may be republished online under the CC-BY-NC-ND Creative Commons license. The Pesquisa FAPESP Digital Content Republishing Policy, specified here, must be followed. In summary, the text must not be edited and the author(s) and source (Pesquisa FAPESP) must be credited. Using the HTML button will ensure that these standards are followed. If reproducing only the text, please consult the Digital Republishing Policy.